Where Have the Good Men Gone?

For the past few years there have been intermittent editorials in various media publications, mostly from women, lamenting the cultural phenomenon of so-called “man-children.” The basic idea is that guys in their 20’s and 30’s are playing video games instead of turning into their fathers. The Wall Street Journal just published one more for the pile.

Not so long ago, the average American man in his 20s had achieved most of the milestones of adulthood: a high-school diploma, financial independence, marriage and children. Today, most men in their 20s hang out in a novel sort of limbo, a hybrid state of semi-hormonal adolescence and responsible self-reliance. This “pre-adulthood” has much to recommend it, especially for the college-educated. But it’s time to state what has become obvious to legions of frustrated young women: It doesn’t bring out the best in men.

– Where Have the Good Men Gone?

I have no doubt in my mind that many of these man-children exist, and in quite a large number. Being 28 and living in NYC, I can absolutely confirm the existence of trust fund kids, hipsters, college dropouts, and former frat boys who don’t have serious jobs. They live irresponsible, often drunken, lives. I’ve seen everything from the typical guy in a band to guys who play online poker to make rent. I know some females in this pre-adult category as well, but men are the majority, anecdotally speaking.

Do I think this is a problem? Yes, I do think so. Without serious careers, spouses, or children, these people are going to have some serious problems in the coming years. They’ll have no retirement savings, and nobody to take care of them. Even if the economy recovers, they’ll have no marketable skills to get good jobs. The newer college graduates will leap over them. It’s definitely a crisis our society is not structured to deal with. Since our government only cares about the short term, this won’t be fixed. The consequences won’t appear for a few more decades yet.

Despite that, I do think that these journalists are clearly missing out on one particular group of people, and that is people like me. For every man-child I know who wastes away playing MMORPGs all day, I know someone like myself. We have quality careers. We cook, clean, handle finances, and live as responsible adults. We are not the same as these immature people avoiding adulthood. We are successful professionals, but we are lumped in with the man-children.

Why don’t we get any recognition? Because it’s the year 2011, and our hobbies now include such things as video games, comics, and cartoons. There is a quite significant group of people who still look down on geeks and their hobbies as not being adult. What makes a guy who plays golf and fixes cars more of an adult that someone who enjoys playing tabletop role playing games? They both have jobs, they both pay the bills, they both get the job done. Hobbies are not related to maturity level in any way.

Kay S. Hymoitz, and others like her, continue to falsely associate the popular hobbies of the modern geek with immaturity. It stems mostly from the same source as Roger Ebert’s disrespect of the video game as an artistic medium, but has an additional layer of sexism on top of it. You don’t see anyone calling out geeky women as immature girls. Instead, they are cool and hip. If they are interested in science or technology, that’s even better. But a man who is a computer nerd is an immature little boy. Double standards much?

You don’t have to go much further than the surface of the Internet to find the enormous army of responsible, successful, adult geeks, like my friends and I. Do you think Mike Krahulik and Jerry Holkins of penny-arcade.com are children in men’s bodies? How about Steve Wozniak, Jonathan Coulton, John Hodgman, Jeff Atwood, Kevin Rose, Mark Zuckerberg, or any of the other successful nerds out there? Are they so-called man-children? I didn’t think so. 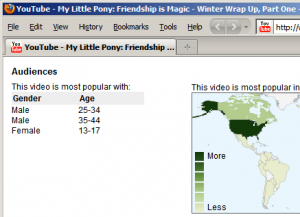 If someone truly refuses to grow up, has no job, no skills, and is going nowhere in life, then feel free to call them out on it. Just don’t judge someone’s maturity level by their chosen hobbies. The world we live in now is one in which the same guy who responsibly contributes to his 401k also spends evenings watching My Little Pony.

If women are interested, they are going to have to cast away their prejudices of old. I know many geek couples, married and not, who are in wonderful relationships. Some even have children. Anecdotally speaking, I don’t see the non-geek couples of my generation getting along nearly as well. Instead, I see a husband sneaking to play video games when the wife isn’t home. That’s a divorce in the making if I’ve ever seen one.

Women, throw away your prejudices against geek hobbies. If you’re looking for a man, don’t ignore the nerds. They might scare you by talking about comic books, but if you wait a minute you’ll see they have real jobs, are incredibly smart, and live very responsibly. Maybe if you even listen, you’ll find you enjoy these hobbies, and your impression of what they were about was all wrong. If you reject every guy with an XBox, you will be quite lonely, and have nobody to blame but yourself.

This entry was posted in Society. Bookmark the permalink.

1 Response to Where Have the Good Men Gone?

This site uses Akismet to reduce spam. Learn how your comment data is processed.